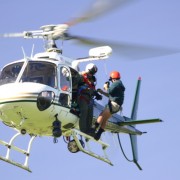 Governed by the Riverside County Sheriff’s Department, RMRU has saved over 1,000 lives and conducted approximately 2,000 missions since it was founded in 1961. Best of all, RMRU uses Mission Manager to help manage their teams and track their missions.

Founded in 1961 by six outdoorsman, the Riverside Mountain Rescue Unit (RMRU) today comprises 30 volunteers trained and ready to respond to wilderness emergencies – at any hour of the day – regularly leaving their jobs or warm beds in the middle of the night to respond to a call for help.

RMRU, governed by the Riverside County Sheriff’s Department, is a non-profit organization that supports law enforcement

The small yet spirited group of volunteers are on constant alert, relying on Mission Manager and other tools for callouts ranging from lost and injured hikers, skiers and rock climbers to missing children and Alzheimer’s patients.

And their efforts have not been in vain. Averaging 40 missions per year, RMRU has saved over 1,000 lives and conducted approximately 2,000 missions since it was founded. About 95% of its missions are within Riverside County, Calif., a 7,206 square-mile-area equivalent to the size of New Jersey that spans from the Greater Los Angeles area to the Arizona border. The volunteers have also traveled into Mexico, the High Sierras and Nevada to accomplish their lifesaving missions.

“Mission Manager helps us tremendously — from our callouts and record-keeping to equipment and member tracking,” said Glenn Henderson, who administers Mission Manager along with fellow RMRU team member, Gwenda Yates, both of Hemet, Calif.

RMRU discovered Mission Manager two years ago at a Mountain Rescue Association (MRA) annual conference. MRA, which was formed in 1958 to develop and standardize mountain SAR operations, consists of 100 rescue teams and 2,000 professional volunteer mountain rescuers around the nation. Since then, RMRU has used Mission Manager to support approximately 120 missions and send more than 20,000 messages to its members.

“We use Mission Manager not only for our communications, but also to record hours of training needed for certifications. Mission Manager helps us track every hour of every member, giving us credit for what we’re doing … This is extremely important, because it shows our value and helps us get funding so we can carry out our missions.” – Glenn Henderson

Yates, who is responsible for logging and tracking events in Mission Manager, among other tasks, said she finds the software very user-friendly.

“Mission Manager is designed in layman’s terms. It’s much easier to use than other emergency management software that I’ve experimented with I’m not a technical person – although I’m better than average. So this is a very important feature.”

In terms of funding, RMRU needs at least $1,250 a month to run its growing operations, and it relies heavily on private donations. The Riverside County Sheriff’s Department has provided RMRU with much-needed support, including rescue

vehicles and gasoline for its missions.

Each member also donates to the unit’s account to help fund the team’s gear and send a member to conferences sponsored by MRA and National Association for Search and Rescue (NASAR).

Additionally, team members spend one weekend each month training to sharpen their rescue skills. To get field-certified by MRA, members must also pass an annual field-qualification test that involves hiking up the steep 2 ½ mile Devils Slide Trail in Idyllwild, carrying a 30-pound backpack, within a 45-minute timeframe.

“We train as a team and work as a team, because teamwork is required to be successful in saving lives,” said Henderson, a retired math teacher and avid outdoorsman. “We also socialize as a team, and have a lot of fun in the process. It’s also a great way to stay in shape!”

Since July, the unit has been deployed in over a dozen missions, including the recent search for the 75-year-old Alzheimer’s victim, Sally Estabrook, who wondered away from her family’s campground on Oct. 6 near Julian. RMRU was called in to assist San Diego County, along with teams from three other counties. Unfortunately, after a three-day exhaustive search effort, Sally was never found.

The other recent missions had happier endings, including searches involving a missing 11-year-old girl in Moreno Valley and a developmentally challenged 19-year-old man who wondered off in Wildomar. Other success stories involved hoist evacuations for hikers in the Corona foothills, the San Jacinto Mountains and Gillman Hot Springs.

“It’s absolutely rewarding when we bring the people home,” said Yates, whose primary contribution is administering Mission Manager versus stomping the ground. “Just knowing that guy is going to live another day because of something you did is extremely satisfying, even if I wasn’t physically involved in the search.”

If your are interested in joining the team or donating to its life-saving missions, please call 951-537-8223 or visit http://rmru.org/. Just keep in mind that unlike training sessions, missions are not scheduled conveniently on weekends. That’s why RMRU team members always say in parting, “See you tonight.”