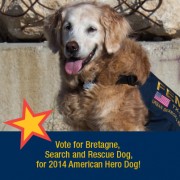 Meet Bretagne. She’s adorable, faithful and incredibly brave. She’s also one of America’s most  heroic  pooches that will be honored during the 2014 American Humane Association Hero Dog Awards™ gala on  Sept. 27.  Mission Manager is a proud sponsor of Bretagne, the SAR Hero Dog finalist – and we believe this top dog should have its day!

As one of eight Hero Dog nominees, Bretagne is a former World Trade Center rescue dog who now spends her days helping first graders learn to read.  Bretagne, a 15-year-old golden retriever from Texas,  has made significant contributions to the Search & Rescue community over her long career. In addition to her efforts during 9/11, she has been deployed to the Olympic Winter Games in 2001, Hurricane Rita in 2005 and many other callouts.

Although Bretagne retired in 2008 from active Search & Rescue duty, her work is not done. She continues as an ambassador for the SAR community, prancing into schools with her tail wagging and fur highlighted with silver.

She’s been described as an affectionate pooch to everybody, and fiercely devoted, and never takes her eyes off her handler. She has always taken her job seriously as a search dog, but at the same time, she’s always up for a belly rub or a treat, according to the American Humane Association.

During her first deployment at the World Trade Center – while searching through the debris in an unknown, chaotic environment – she knew who needed the comfort of a dog, which firefighter needed to hold her close and stroke her fur.

Today, she is always finding joy in her work and not letting her age define her, according to the American Humane Association. Bretagne is definitely a Hero Dog, and we are proud to promote her outstanding SAR contributions during the Hero Dog Awards gala.

Presented by the Lois Pope LIFE Foundation, the American Humane Association Hero Dog Awards seek to identify and recognize America’s Hero Dogs – ordinary dogs who do extraordinary things, whether it’s saving lives, lending sight or hearing to those in need, or just welcoming us home at the end of a hard day.

The eight finalists were selected in July after more than one million votes were cast by the public and a celebrity panel of dog lovers and experts.  The public now has the opportunity to vote in the final round that will determine which heroic hound will be named this year’s American Hero Dog at the fourth annual Hero Dog Awards.

Each of the eight finalists and their handlers will be flown to Hollywood to take part in the event at The Beverly Hilton hotel on Saturday, Sept. 27, which will be broadcast on the Hallmark Channel in the fall. There they will walk the red carpet, conduct VIP interviews, and attend the star-studded awards show and  black-tie gala where the winning 2014 American Hero Dog will be chosen.

The public is invited to submit one vote per day through Sept. 15.  So please cast your vote for Bretagne at www.herodogawards.org.